How To Play Ice Hockey

The game of ice hockey is believed to have evolved from the Dutch game of Colf played using a wooden curved stick, a wooden ball and 2 landmarks. 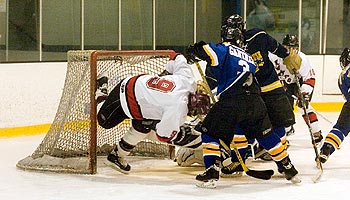 Another European game, 'shinney', was played on the ice in Nova Scotia. By the early 19th century ice hockey began being played in Canada using a puck. The term 'puck' comes from the Gaelic word 'goelie' meaning “punch, poke or give a blow. The 1st indoor ice hockey game was played in Montreal in 1875.

Ice hockey is played on an elongated 200' long and 85' wide rink A red line in the center divides the rink into 2 sides. Neutral, defense and offense areas are denoted by blue lines across one of which the puck must pass to score points. A goal cage, 6' wide with two 4' tall posts is positioned 17' from the outer edge of each side.

The game begins at the face-off circle where the puck is dropped and a scramble ensues as the center from each team tries to capture the puck. The game is divided into 3 periods lasting 20 minutes each. For non-pro and youth teams, time periods usually last 10 minutes each. Each team is allowed 6 players on the ice during each period with positions being forward (offense), defense and 1 goalie. If the score is tied at the end of the 3rd period, the game moves into a 5 minute overtime time or “sudden death” period with the 1st team to score being declared the winner. If no score ensues, the game is officially declared to be tied. Overtime consists of 5 players from each team with only 4 moving.

The object of the game is to score points by successfully maneuvering the puck into the opposing goal area. Maneuvering consists of making, blocking and defending shots. The game is supervised by referees wearing orange arm bands and linesmen who do not wear bands. It is the responsibility of linesmen to call violations, stop fights and initiate face-offs. Officials in the off-ice area act as time keeper and score keepers. It is the duty of the judge,one on each side, to evaluate the puck activity.

Aside from the puck and sticks, basic equipment for each player consists of a helmet, mouth-guard and padding to cover strategic body points especially arms and legs. Players may choose to wear a neck-guard as well.

Navigation: The UHL » How To Play Ice Hockey