An ice hockey tournament is a structured system of determining which team, out of a group, is the superior one. 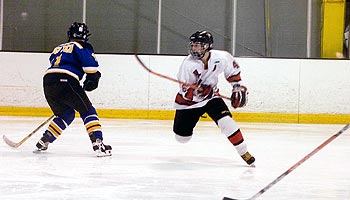 Tournaments are played at every level, from youth leagues all the way up to the professional level such as the NHL playoffs and winter Olympics.

A tournament structure is often used as a playoff system. In this case, the teams that had the best records from a season of play are given a chance to compete against one another until a final champion emerges at the end of the tournament. Aside from being used in a playoff scenario, tournaments are often used in invitational events, or events where the teams have not been playing against one another regularly, but are all sufficiently skilled to play against one another. This is the case with the Olympics, as well as other such worldwide events that occur throughout the year.

Tournaments are usually structured in progressive elimination rounds. The first round will have a preset number of games to play between opposing teams (such as best out of three games) and the winner will move on to the next level of the tournament. This decreases the amount of teams playing in each round, and allows the better teams to continue playing while eliminating weaker teams from contention. Often, the later rounds will contain a greater number of games for teams to compete against each other in.

Occasionally, if an uneven amount of teams is present for the tournament, some stronger teams will be allowed to skip the first round in order to allow all teams to compete.

Tournament play continues until only two teams remain, who face off against one another in a championship round to determine the victor of the tournament. Winning a tournament in any level of play is a great accomplishment for any team.